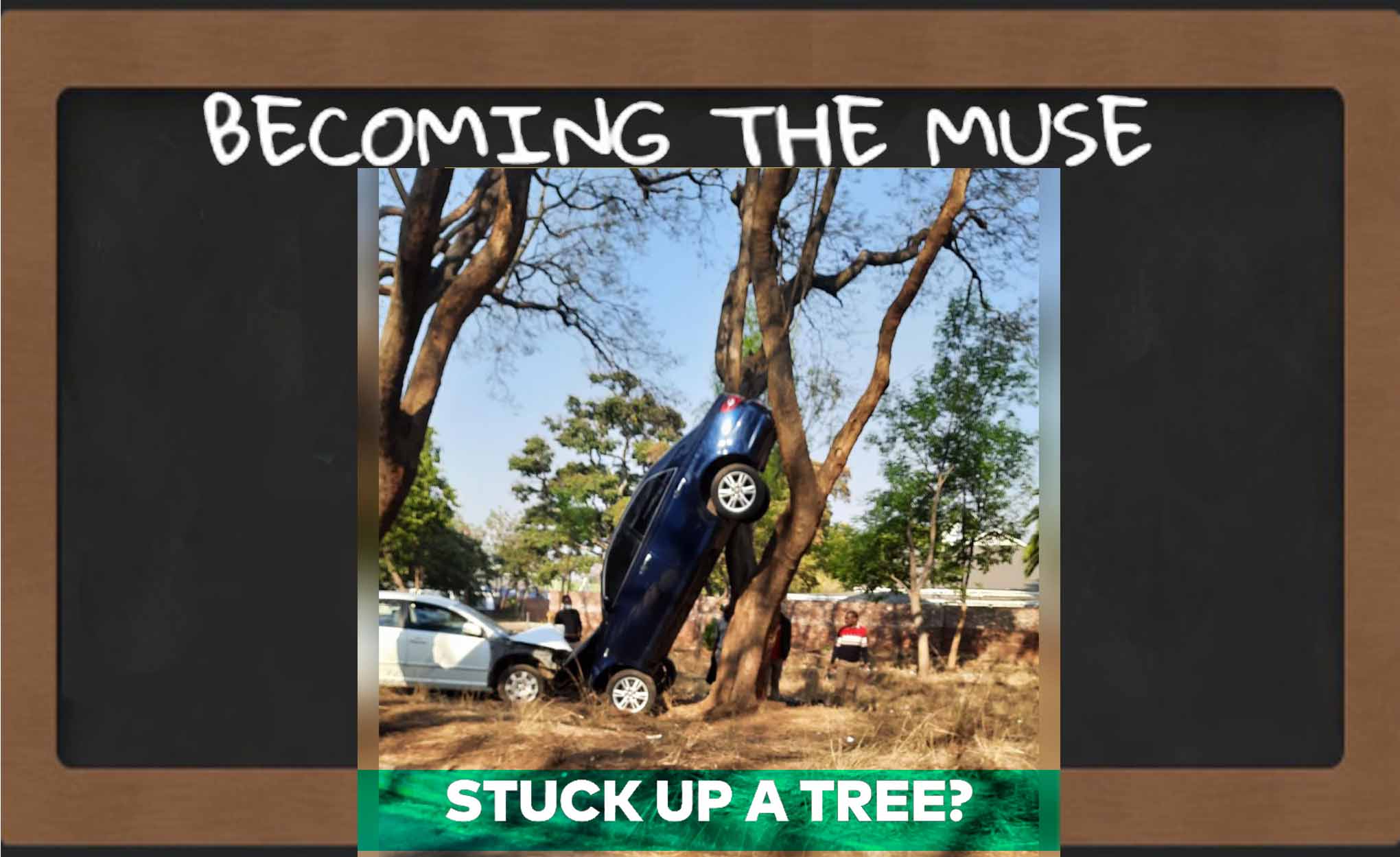 Scrolling my Twitter feed on Thursday morning, just a day after lockdown restrictions had been reduced from Level 4 to Level 2 I ran into viral visuals from an accident scene.

One of those things you look at and think how did that get there?

A Toyota Mark X stuck up a Jacaranda tree.

It was shared no one was injured in the accident which was said to have occurred along Leopold Takawira Road just opposite Harare’s Parirenyatwa Hospital. As you can imagine social media was abuzz with speculation on what could have transpired for the car to come to gravity defying rest…

Toyota Mark X actually begun to trend as people commented on how it was a car with a powerful engine and if driven by one with little restraint on the streets, well, that was a recipe for being stuck up a tree. Ran into someone who was trying to explain the “physics” behind it, that the engine is so heavy that its center of mass would allow it to flip and settle like that on the jacaranda tree… er.. ok then..

I also came across an analogy of how if you are walking casually and tripped over a small stone you would likely just stumble a little bit, but if you walking fast or running and you tripped on a small stone, then it would be goodbye and see you next fall.

They say bad news travels fast. If something bad happens it will have travelled around the world before the truth has finished putting on its shoes. In the case of the accident well, details were already making rounds on social media some describing the directions the cars had been travelling the speeds they had been travelling at, giving almost eye witness account of events they had not seen….

Even a reporter from local newspaper had also shared about the “accident” awkward, but they did manage to save face

It turns out the accident was a “simulation” or rather a photoshoot set for a product launch by Zimnat General Insurance.

A few people had seemed to connect the teaser Tweet by Zimnat and the accident simulation or maybe they had a few people in on the plan to drop breadcrumbs which people would put together, at least that’s what I would do if it was my marketing campaign.

Zimnat General Insurance was launching its new Assessment Centre which provides vehicle assessment services for all those involved in accidents. Clients who are insured with Zimnat will have their vehicles towed to the Vehicle Assessment Centre where they will get quotes for repairs, submit their insurance claim and in the interim get a courtesy vehicle for two days free of charge.

I am not sure how much of the campaign launch was designed to go viral or if it was a happy coincidence which they just ran with but in the past, the Zimnat Group has been having some disruptive marketing campaigns such as the one which packaged as WhatsApp Drama Series Jabu’s homecoming..  Kudos to them for daring to push the envelope and creating buzz around their brand.

The photoshoot can also be a traffic safety awareness campaign as well, because scrolling through the internet people were giving their expert opinion on how the car had gotten stuck up a tree some pointing out various reckless driving antics such as speeding, drinking and driving… It also again highlighted how information gets distorted on the internet, somewhere out there is probably someone still wondering how a car got stuck up a tree and haven’t gotten the memo that it was a simulation of an accident….

If I had a car I would probably be out looking up how much the insurance cover costs but I am team Honda Feet get it? You know the Honda Fit right?… hahaha that sounded funnier in my head….