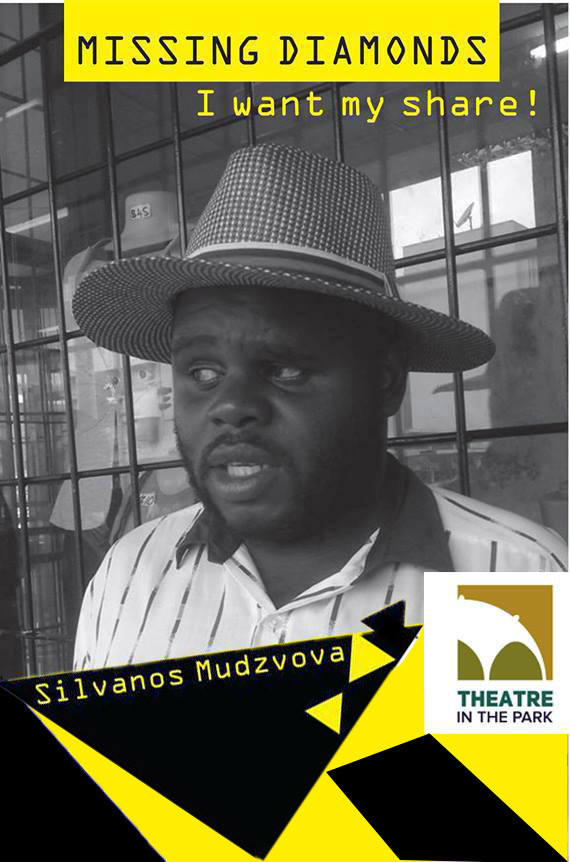 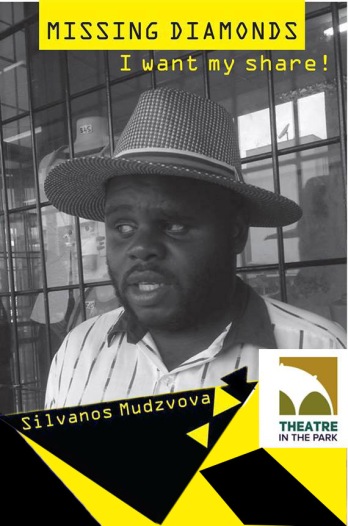 I attended the premiere of a one man satirical play titled MISSING DIAMONDS: I want my share by Silvanos Mudzvova.

Technically speaking this was not the debut performance of the play; the first performance was staged outside the parliament building on Wednesday Question and Answer Session and ended a few minutes into the thirty minute play when the actor was whisked away by the police. 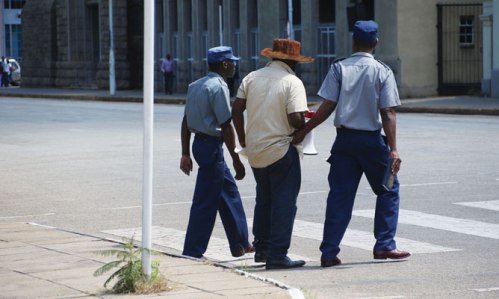 The actor says that the play was not meant for theater but in theater one can exercise their freedom of artistic expression.  Initially the actor intended to stage his performance four times, once at the parliament building, then at the Chinese Embassy, Mbada Diamonds offices and at Anjin Investments, but has since received multiple invitations some of which are international.

The play was inspired by the president making an admission that the country had “lost” 15 Billion  dollars worth of diamond revenue. This missing 15 billion also sparked a lot of internet responses ranging from absurd to some pertinent…. 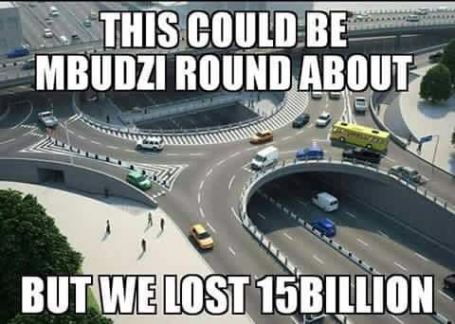 The actor says 15 billion dollars is far too much money for people and Parliamentarians to stop talking and asking about it.

I have never been to a one-man play let alone a satirical one and so I didn’t know what to expect.

The play opens with the actor giving a narration of his thoughts on the missing money and how he calculates that divided by the population of the country each person is entitled to slightly over $1000 but he would settle on a round figure of $1000 subject to tax and any other banking expenses. He proceeds as if he is in parliament asking “Honourables” about his share, then the story flashes back to events that preceded him ending up where he is, in front of members of parliament.

You watch through multi-character portrayal how a billion dollar diamond operation runs for years, yet the ordinary people do not benefit as they journey through a pothole ridden road, destroyed by traffic carrying diamonds. You see how elected officials live in luxury  and the ordinary folk  in poverty, all he wants is his share of the obvious vast wealth they are spending, who must he ask, when the police well, are more an agent of oppression. He would rather ask the president directly, but the president is a man for too busy and important to deal with regular folk so he will talk to parliamentarians who are close to the president and elected to ask on his behalf, and so he goes to parliament.

The play is mixture of hilarious, poignant and some hard hitting reflections as he asks the audience questions as if they are part of the play and you never really know if he is being rhetoric or the show is interactive. The highlight of the play was when he says all he wants is $1000 but imagine someone plotting to have all 15 billion for themselves and launches into skits showing how people would lavishly spend such money if they had it “kalife kemari” (That money life) He changes character with the change of a hat so you can tell whom he is playing, and with lots of innuendo refers to government officials never mentioning anyone by name but if you know, you would connect the dots.

Towards the end of the play Silvanos likens the people to the baboon of the hare and baboon folktales, where clever tsuro(hare) would always get the better of gudo( baboon), they take from us and all we do is chase but never catch them. He calls us coward thinking we can change the world via social media. The last statement is a declaration that he is not asking the money for himself but for the country so that if it’s in the system each one can benefit some from the money.

As I watched this production sometimes I looked around like expecting police to bust through and arrest everyone in attendance I don’t know where I got such a thought as there was hardly anything treasonous in the play but it just goes to show how stifled freedom of expression is and we are shocked by anyone voicing any public opinions while we only hide behind social media, maybe we are cowards, afraid to let out voices be heard.

In as much as plays go this might not be the best play I have seen but it is the most thought provoking and dare I say controversial, definitely a must see.

I could not help but give Mr Mudzvova my respect for his bravery in staging his performance at parliament and all others places he intends because I could never ask the questions he asked even if in satirical play. He got a standing ovation I am sure people who were there felt something of the same and one person even asked him if he was not afraid.

Mr Mudzvova said he was afraid, but that would stop him from giving voice to issues that need to be said. He speaks for those who have no voice for those afraid to use theirs.

And his question still haunts me, 15 billion dollars is far too much money to let simply just vanish without a trace…….

This week I try something a little different from my regular posts.