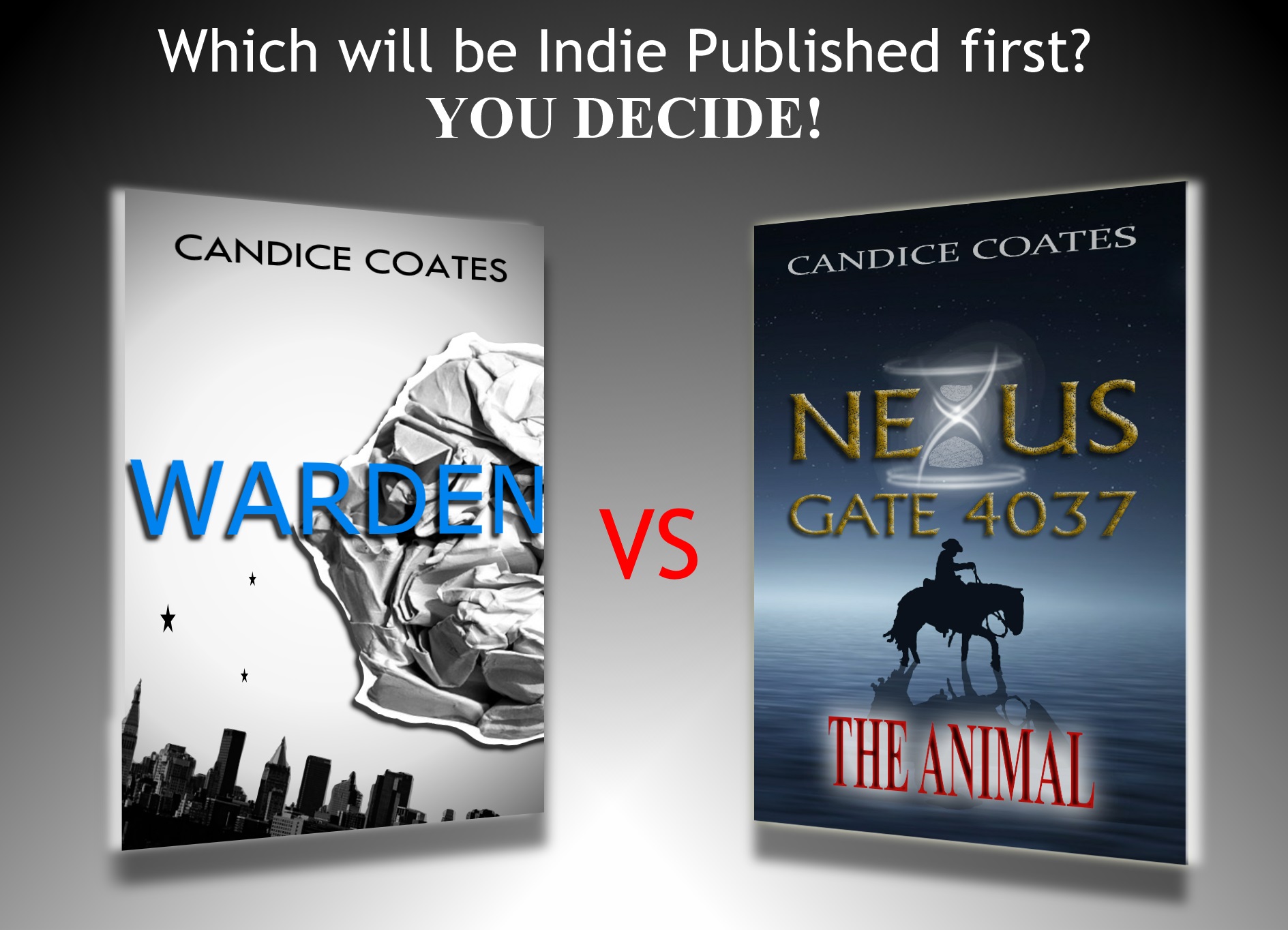 If you were having coffee with me……… we would be hosting a special guest author Candice Coates.

My dear friend Candice has two novels ready for publication Warden nor Nexus Gate 4037: The Animal. 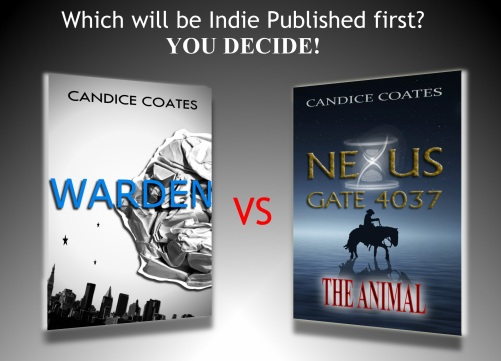 We had an interesting chat with Candice about writing, books, battles and aliens grab a chair some coffee and join us……..

–why a book battle?

The concept for the Battle of the Books came from my own indecision. First, neither Warden nor Nexus Gate 4037: The Animal are my first finished manuscripts, however, they are the strongest in my opinion. I chose to battle them because I was undecided about which should have the seat as my purchasable debut novel. The two tales are extremely different in character, but I recognize that the one published first may in fact set the tone for my audience. What better way to have the tone set than to have the audience decide.

-Whats in a name? How did you come up with the book titles ?

Book titles are tricky things, aren’t they? I honestly believe that each tale named itself in a way. Whenever I think about either of them I think about them by the names they currently have. I’ve fooled around with other titles for Warden but nothing else seemed to fit. Nexus Gate is also titled ‘The Animal,’ since this book is a series, like Warden, but unlike Warden the story is told in a linear way. *SPOILER ALERT* Each additional title, like The Animal, is describing the character of Tucker John and where he is currently within his journey.

–I know you would say you love both equally but …. is there one you are secretly hoping gets picked and why?

You are right I do love them equally, but if I had to be the ultimate deciding vote for which would be published first, I would go with Nexus Gate 4037: The Animal. The concepts within this story, the struggle with morality, the confrontation with racism/colorism and just about any other ‘ism’ are relevant now, and honestly, has been for a while. This story deals with these issues in a straight forward, way but does so in a manner that allows the reader to be aware of the struggle but enjoy the growth and the flow of the story. I think I subconsciously told the story as an allegory for the mindsets of today. We are living in a world of extremist; people who are extremely ignorant of reality either because they are sheltered or by choice, people who are extremely hateful because of fear or how they have been cultivated. No matter which side of the spectrum a person is on, both are rooted in a form of fear, and when fearful people are the decision makers, the results are without a doubt devastating. The backdrop of the Nexus Gate shows you what that could potentially look like if fear wins from either end of the spectrum.

In short, comparing the two, Warden is an awesome ride of action and adventure. Readers will enjoy it, they will fall in love with the characters and the worlds created. But Nexus Gate will make the reader think, cause them to be a bit more introspective about their own views and thoughts and how they deal with people who are on opposing ends.

–Do you ever get surprised at the way the story turns out? or that’s impossible every scene and plot is meticulously planned out on some vision board

I am often surprised at how my stories tell themselves. I may have one idea but find that my characters have another. When I write I view myself as a stenographer. I type what the characters tell me. There have been times with stories I was working on that I was writing a scene straight from scratch and found myself literally yelling at the computer at the character whose scene I was typing, calling them stupid and asking them why they were doing what they were doing. I was appalled at their behavior but I just kept typing. Now, I do write out the ‘synopsis’ if you will, when I first catch the seed of a story, then I will type scenes as they come even if they are not in order. In which case, I save them in a file and work on the manuscript and when the story weaves in the direction of a previously written scene, I add it in.

–if you could go back in time, to when you first picked up a pen, or was it typewriter what would you tell yourself?

I would tell myself to just have fun, and not to overthink the process. But I would also tell myself that there is a lot of work ahead, that the first draft is just that, a first draft of many. I would also tell myself not to have thin skin that every story is not for everyone and that is okay. Be confident in the work you’ve made no matter the negative feedback or silence that may come. If you’ve done an honest labor of love, be proud of that and celebrate the achievement even if only one person reads it. Perhaps the story was for that one person alone, and that too, is okay.

I am a struggling night owl. I’d like to get to bed earlier. For me, that is before 1:30am…most times I am in bed closer to 4am. I can get up early though without much issue BUT I will need a nap for obvious reasons. In my adult years, I’ve found that naps are indeed a blessing from God. Lol.

lastly…. If aliens from the future, light years from now were to come to earth why should you be the first person they see before they ask to be taken to “our leaders”

Well, I am very hospitable and I think I would give them a good impression of Earth people. I am also pretty good with linguistics so communication might be easier for me. Also, who’s to say I’m not the leader 😛

BIO: Candice Coates is a fiction writer, jumping from genres ranging from Speculative Science Fiction and Fantasy to Comedic Clean Read Romance and Drama, all with touches of her Christian faith. She is a lover of Ireland, tea, and just about anything with pistachios. When not writing she is creating visual art with pen or paint, or she is creating new designs for her handmade polymer clay jewelry line, Shizen Brook. To read more of her work you can find her at her author site, candicecoates.wordpress.com or icameforthesoup.com. You can also find out more about her and how to stay connected by going to www.about.me/candicecoates

The battle of the books promo started on the 20th February and will run till the 25th of March pop by her site read a bit and vote wisely…..

PS do hit us up and let us know what you think thanks a bunch…..